Stages of Pre-tensioning
In the pre-tensioning system, the high-strength steel tendons are pulled between two end abutments (also called bulkheads) prior to the casting of concrete. The abutments are fixed at the ends of a prestressing bed.
Once the concrete attains the desired strength for prestressing, the tendons are cut loose from the abutments


The prestress is transferred to the concrete from the tendons, due to the bond between them. During the transfer of prestressing force, the member undergoes elastic shortening. If the tendons are located eccentrically, the member is likely to bend and deflect (camber). 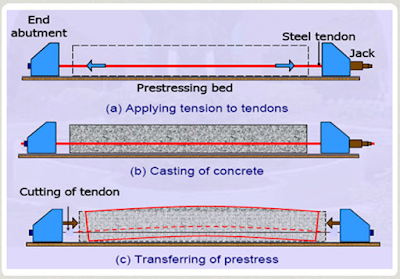 Post-tensioning concrete: in this type concrete casted first and after it gains the required strength cables tensioned. 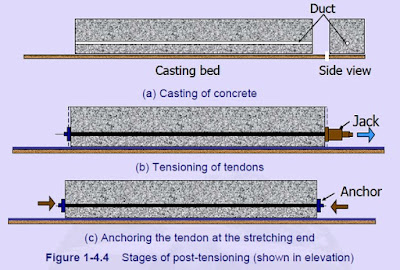