By Mohammad - May 22, 2019
A rigid L-shaped frame ABC consisting of a horizontal arm AB (length b =10.5 in.) and a vertical arm BC (length c = 6.4 in.) is pivoted at point B, as shown in Fig. 1. The pivot is attached to the outer frame BCD, which stands on a laboratory bench. The position of the pointer at C is controlled by a spring (stiffness k = 4.2 lb/in.) that is attached to a threaded rod. The position of the threaded rod is adjusted by turning the knurled nut.
The pitch of the threads (that is, the distance from one thread to the next) is p =1/16 in., which means that one full revolution of the nut will move the rod by that same amount. Initially, when there is no weight on the hanger, the nut is turned until the pointer at the end of arm BC is directly over the reference mark on the outer frame.
If a weight W = 2 lb is placed on the hanger at A, how many revolutions of the nut are required to bring the pointer back to the mark? (Deformations of the metal parts of the device may be disregarded because they are negligible compared to the change in length of the spring.) 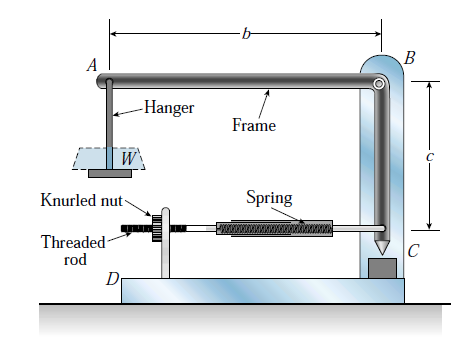 if a load added at A, this will generate a movement at point C towards the right, spring will be stretched in turn, using free-body diagram shown in figure 2 we can calculate force at spring 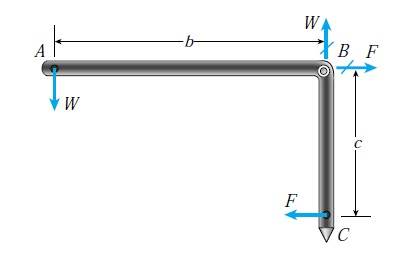 so the spring will be subjected to axial force equal 3.28125 lb

one revolution of nut equal 1/16in