By Mohammad - May 27, 2019
Let consider a slab supported by beams and columns, to begin structural analysis for each member, we need to know the amount of load transferred to this member, the amount of load transferred to any member can be determined using tributary area(loading) concept. the geometry of a structure will determine the shape of the tributary area.

In a one-way system, slab delivers the load to supports by one-way action. the dimension of slab shall satisfy the following equation to act as one-way slab L2/L1>2. let consider floor system in figure 3, L2/L1 for beam AB L2/L1=15/5=3, therefore slab will transfer the loads to beam in one-way action, tributary area for beam AB, E-f will be as shown in figure 3, loads of 100*2.5=250Lb/ft(linearly distributed over the whole length of the beam, for beam CD, the load will be 100*5=500Lb/ft, beam CD will share loads from both sides because it is located at the center of slab. beams AB, CD, EF will transmit the loads to girder AE and BF, girder AE, and BF will share the half of load for each beam as shown in figure 4. 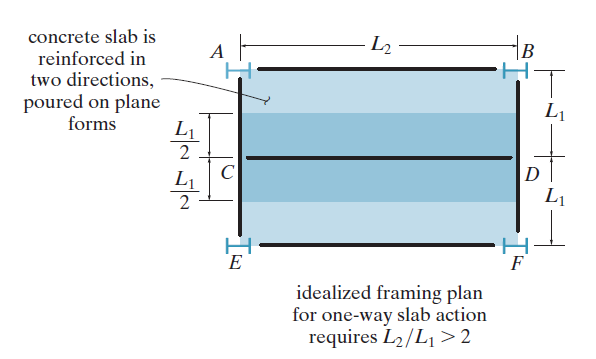 Now let consider reinforced concrete slab in figure 5, this slab supported by four edge beam AB, BD, DC and CA, L2/L1=10/10=1, therefore, it is a two-way slab, for the two-way slab the distribution of load for beam AB will be as shown in figure 5, diagonal at 45 angle will be drawn from point A and point B, the tributary area will be triangle, in this example the tributary areas area equal for all beams because L1 and L2 are equal, the distributed over beam AB will be a triangle shape similar to tributary area, this load will be zero at point A and B, then increasing to maximum value equal to 5*100=500Lb/ft as shown in figure 5

if we consider slab in figure 6, L2/L1=1.5 so it is a two-way slab, a diagonal line at 45 angle will be drawn for beam AB from point A and B, because the length and width of the slab are not the same, the tributary area for beam AB will be trapezoidal as shown in figure 6. the load distribution over beam AB will be similar to tributary area with peak load equal to 5*100=500 Lb/ft.