High-strain dynamic test performed by dropping a heavyweight that will cause a high strain on the pile foundation and measuring the velocity and force response of the pile foundation. This test can be used to evaluate the pile integrity, and the maximum compressive and tensile stresses occur on the pile due to impact. The dynamic test results can be used to assess the pile axial static capacity if sufficient movement occurs during the impact of heavyweight. The estimated axial static capacity may be affected by the following factors: 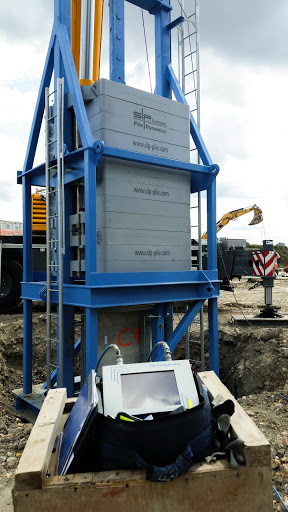 Figure 1
The dynamic test can be conducted for driven and cast-in-situ piles. Piles made from concrete should be allowed to gain sufficient strength before doing the test. The transducer should be attached to the pile, as shown in figure no:2. For driven piles, the dynamic test can be conducted during the driving period. The measurement of impact will be taken with the routinely blow count. The response of pile to high strain dynamic test will be determined for ten impact records during the initial driving and one or two at the time of beginning pile restrike. The conduction of tests during the initial driving can help in monitoring the performance of the impact device, the driving stresses, the integrity of the pile, and the relative change of pile capacity. While conducting the test at the time of restrike can be used to determine the pile static capacity.
Figure 2
Before beginning with the test we need to determine the wave velocity in the deep foundation, mass density of deep foundation, and dynamic modulus of elasticity for a deep foundation. The wave velocity of a deep foundation can be determined by fixing an accelerator to the pile. Then generating a wave by impacting a sledgehammer of suitable weight at the pile head. Then measuring the total time between acceleration peaks for a minimum of three cycles. The wave speed equals the number of cycles times the double of pile total length over the total time. The wave speed of structural steel piles can be assumed as 5123 m/s.
The density of the tested pile should be determined. Concrete piles density can be assumed to be 2450 kg/m3. While the density of steel piles can be assumed to be 7850 kg/m3. The density of composite piles, such as concrete piles with steel pipes, can be determined from the weighted area of each material. Assumed density values should be verified if possible.
The dynamic modulus of elasticity for the pile foundation can be determined by multiplying the mass density of the pile by the square of wave speed (E= ρ*C^2). Now after determining all the required information and fixing the transducer in place. The impact hammer should be positioned to apply a concentric axial load on the pile. A cushion should be placed at the head of concrete piles. The cushion will prevent the damage of piles due to the impact. Also, we should prepare the apparatus for recording and processing the data. The hammer weight should be recorded. For single-acting diesel, air, steam, and hydraulic hammer, the travel length of hammer should also be recorded. While for double-acting diesel hammer, we should record the bounce pressure. For double-acting steam or air compressed pressure hammer, The air or steam pressure should be determined in the pressure line. Record the number of impact blows per minute delivered by the hammer.
After preparing the pile foundation and obtaining all the required information such as hammer weight, wave velocity, the mass density of the pile foundations, and others. Now, we can start the test and take the measurement. The velocity and force measurements shall be taken and recorded for each impact. The net displacement of the pile per impact should be determined by the transducer fixed on the pile or by the integration of the velocity versus the time record.  Obtain the maximum energy transferred to the location of the transducers from the integral over time of force multiplied by velocity.
For cast-in-situ piles, the test should be conducted when the concrete achieves a sufficient strength. The steel cage spiral should be extended to pile head to prevent the concrete damage during the impact. A steel plate should be used as a cushion to protect the pile head and distribute the stresses resulting from the impact. The transducer should be fixed at a distance of 1.5*pile diameter. A series of impacts shall be applied to pile foundation by the use of a hammer that weighs at least 1% to 2% of the desired ultimate capacity.
Figure no:3
Interpretation of the test measurements, including measurements down the pile if applicable, to estimate as appropriate the overall magnitude of the dynamic and static axial compressive capacity mobilized at the time of testing, the distribution of the dynamic and static axial compressive capacity along the pile length, and the engineering properties of the pile and the soil or rock adjacent to the pile as used in the interpretation. 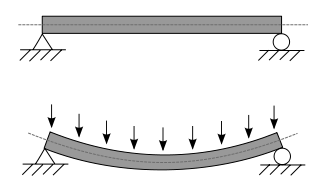